Multinational enterprises ("MNEs") are facing the biggest upheaval in international taxation in a generation. More than 130 countries, including the United States, China and India, have agreed to implement the Organisation for Economic Co-operation and Development's ("OECD") two-pillar solution on the corporate taxation of the digital economy and large global enterprises. As a summary, the first pillar sets out a framework for allocating additional taxing rights to the market jurisdictions in which goods or services are ultimately used or consumed, while the second pillar introduces a minimum effective tax rate of 15%. 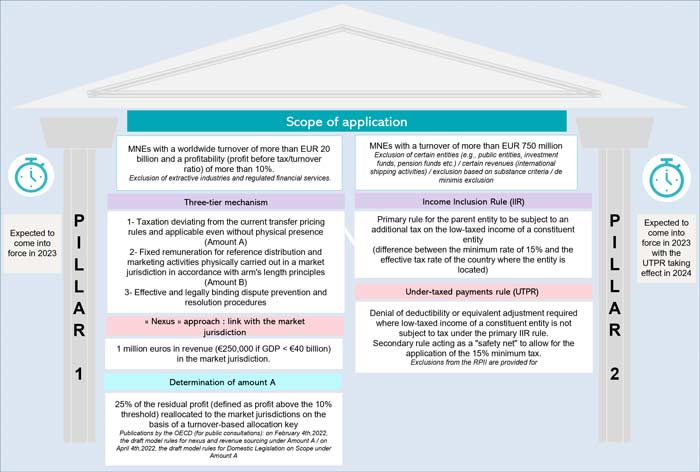 Pillar 1: The new rules will only apply to around 100 global giants, although the turnover threshold may be lowered following a review in seven years' time.

The agreement would put an end to the patchwork of unilateral digital taxes that have emerged in recent years. The signatory countries have agreed not to introduce new digital taxes on their territory and to abolish existing taxes as soon as the new rules come into force worldwide.

Pillar 2: In line with the ongoing fight against aggressive tax planning, the second pillar would make it far more difficult to reduce taxes by recording profits in low-tax jurisdictions and costs in high-tax jurisdictions.

It is important to consider that the threshold for eligibility for the minimum tax floor in the second pillar is much lower than in the first pillar.

Depending on the size of the MNE, its location and the nature of its international activities, the effective implementation of the two pillars will have a more or less significant impact on effective tax rates. While model rules have been proposed by the OECD followed by a proposal for a directive at an EU level, the final architecture of the two pillars is not yet known.

Local legislative approval has still not yet been agreed. More particularly, if the agreement is not enacted in the US, it could quickly collapse. In this respect, the Biden administration has played an important role in pushing the agreement through. A two-thirds’ majority in the Senate is normally required to enact this type of international treaty into law. Securing such support may prove difficult.

In addition, Poland has just vetoed on April 5th, 2022, the proposed directive seeking to implement Pillar 2 in the European Union.

More generally, governments around the world may be looking to see if the global agreement delivers what they believe to be their fair share of taxes. If this is not the case and the consensus collapses in return, businesses could find themselves in the worst of all worlds. The major risk should this happen, would be a return to a situation where countries act independently, bringing with it the divergence, complexity, instability and additional tax costs that entail.