By a decision rendered on 4th November 2020, the Cour de Cassation (French Supreme Court) details the consequences of repeated late filing of declaration form n°2746 regarding the 3% annual real estate tax. In a context of repeated late filings of this form, both a late payment penalty and the payment of the 3% tax are now due even when an exemption of the latter would have initially been applied.

The tax on the market value of real estate owned in France, directly or indirectly by any French or foreign legal entity (regardless of its corporate status), is provided for by Articles 990 D to 990 G of the French Tax Code (FTC).This tax is levied on the market value of property and real estate rights owned in France and includes several possible exemptions. The rate applied is 3%.

In certain cases, these exemptions necessitate the taxpayer filing a specific tax return while in other cases this is not required.

By a decision rendered on 4th November 2020, the Cour de Cassation details the consequences of repeated late filings of declaration form n°2746 regarding the 3% annual real estate tax.

A reminder of the context

On 25th August 2005, LUPA, a Luxembourg company, made a late filing of its 2746 form to the French tax authorities stating that the company was not liable to the 3% real estate tax.

On 6th September 2005, the tax authorities addressed a tax reassessment to the company, claiming that the total amount of the 3% tax was due.

In both 2002 and 2003, the company had already benefited from the tax authority’s tolerance in regularising its situation following the respective late filings of form n°2746.

In 2005, the tax authorities considered that the company should no longer be able to benefit from the continued possibility of regularizing its late filings.

The question subsequently addressed to the Cour de Cassation was whether this late filing can be sanctioned by the payment of the 3% tax even in the event where the entity was covered by an exemption.

Exemptions with the necessity of filing declaration form n°2746

Some companies are exempt from the payment of the 3% Tax but still have to file an annual n°2746 form. This is the case for entities located in France or in an EU member state or in a state which is linked to France by an administrative agreement on fraud and tax evasion.

Form n°2746 communicates information to the tax authorities concerning the nature, value and location of the real estate together with the identity of direct and indirect shareholders of the entity through which the real estate assets are held.

This tax return must be filed no later than May 15th each year.

In the case of legal entities which have not filed their declaration form n°2746 within the prescribed time limit, the tax authorities accept, as a measure of tolerance, that these entities may regularize their situation and thus be exempt from the payment of the tax. However, this tolerance is only applied following a first late regularisation of the declaration form.

However, the Cour de Cassation ruled against the Court of Appeal’s decision and stated that the late filing of the 3% Tax declaration entails, in addition to the payment of penalties and interest for late payment, the liability to the tax itself when the company has previously benefited from the possibility of a late regularisation of its situation.

The financial consequences of such a decision are considerable and highlight the necessity to pay strict attention with respect to the filing deadline. In the case of a sale of shares in a company holding French real estate subject to the 3% annual tax, the buyer should request guarantees to cover the risk of a tax reassessment if the filing of such declaration forms has not been done in a timely manner by the seller.

Finally, as from 2021, declaration form n°2746 will have to be filed online. Considering the financial consequences now at stake, it is essential that those companies concerned ensure they are correctly prepared for this online filing.

The teams of Grant Thornton Société d’Avocats are available to assist you with your tax obligations in France. 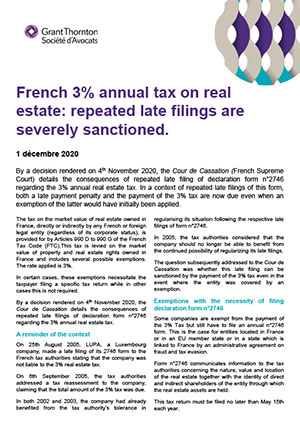 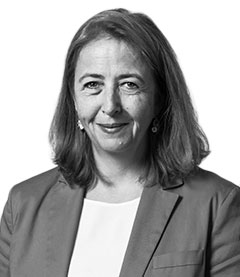