The transfer of criminal risk in merger operations

By:
Stéphane Bénézant Follow on LinkedIn
The Criminal Chamber overturned its jurisprudence regarding the merger operations
Contents

On 25 November 2020, the Criminal Chamber of the Court of Cassation (Supreme Court of Appeal) overturned its jurisprudence concerning the transfer of criminal liability from the absorbed company to the absorbing company in the context of merger operations.

After having taken an "anthropomorphic" approach for a long time - equating the dissolution of a company with the "death" of a natural person - the Criminal Chamber has resolved to take the economic reality of the legal person into consideration where the absorption of a company equates more with a reincarnation than with an absolute death.

Prior to 25 November 2020, the Criminal Chamber refused to admit the transfer of criminal liability from the absorbed to the absorbing company.

Traditionally, the Criminal Chamber of the Court of Cassation maintained that a merger-takeover did not entail the transfer of criminal liability from the absorbed party to the absorbing party. It based this reasoning on Articles 121-1 of the Criminal Code and 6 of the Code of Criminal Procedure which stipulate that « nul n’est responsable que de son propre fait » (an individual can only be held liable for his or her own acts) and that the death of the accused extinguishes all public proceedings in the enforcement of a sentence.

It was therefore by analogy between the dissolution of a company and the death of a natural person that the Criminal Chamber concluded that any criminal action based on acts committed by the absorbed company before the merger operation was annulled.

There were, however, some exceptions to this principle, in particular for sanctions pronounced in matters of competition or in matters of liability for financial or tax offences. These were areas in which the Commercial Chamber of the Court of Cassation and the Council of State had already drawn the consequences of the economic continuity of the absorbed company and the need for pecuniary sanctions to be effective by maintaining that the absorbing company had to answer for the shortcomings committed by the absorbed company. ¹

In this respect, it should be recalled that the Criminal Chamber had already stated that the acquiring company could be held liable for civil interests resulting from a criminal conviction if the acquired company had been convicted prior to its absorption. ²

To the same effect and at a European level, the European Court of Justice had already held in an MCH ruling of 5 March 2015, that Article 19 of Directive 78/855/EEC of 9 October 1978 on the merger of public limited liability companies should be applied, which provides for universal transfer both between the company being acquired and the acquiring company and with regard to third parties, of all the assets and liabilities of the company being acquired to the acquiring company, entailing an obligation for the acquiring company to pay the criminal fines imposed on it following the absorption, for acts committed by the acquired company prior to the said merger. ³

The European Court of Human Rights ruled in a recent judgment dated 1 October 2019 that the approach taken by French law to the repression of anti-competitive practices which draws consequences from the continuity of the business of the absorbed legal person did not contravene the principle of the individual nature of penalties implicitly guaranteed by Article 6 of the Convention for the Protection of Human Rights and Fundamental Freedoms.

Alignment of the Criminal Chamber's position with European jurisprudence

In its decision of 25 November 2020, the Criminal Chamber of the Court of Cassation overturned its previous jurisprudence and aligned itself with that of other French and European courts.

The Criminal Court has abandoned its anthropomorphic approach which was considered too theoretical, in favour of a more realistic and economic approach, and it now considers that the absorbing company can be convicted of criminal acts committed by the absorbed company prior to the merger, the absorbing company being considered as an economic continuity of the absorbed company and not as a separate legal entity that would cease to exist as a result of the merger.

In their explanatory note attached to the decision, the judges of the Court of Cassation nevertheless limit the scope of their decision, specifying that this transfer of criminal liability will only apply to mergers falling within the scope of European Directive 78/855/EEC codified by the EU Directive 2017/1132 of 14 June 2017, i.e. public limited companies (SA) and, by extension, simplified joint stock companies (SAS) and partnerships limited by shares (SCA), which apply the provisions of an SA regarding the regime for mergers.

Moreover, only fines or confiscation for offences committed by the absorbed company before the transaction are mentioned which would de facto exclude sanctions such as a prohibition from exercising a professional activity or an exclusion from public contracts.

Finally, the Court of Cassation specifies that this overturn of position will only apply to mergers concluded after 25 November 2020, the date of the ruling, and this for the sake of legal certainty, except in the event that the merger was decided with the fraudulent intention of the absorbed company evading criminal liability.

How can protection be obtained against this new criminal risk?

Following the decision of the application of this jurisprudence, companies will have to take into account more than ever the risk of criminal sanctions in the context of their acquisition or restructuring operations; this is especially true since the recent ruling by the Court of Cassation that a liability insurance policy taken out by the absorbing company prior to a merger could not apply to acts committed by the absorbed company taking place prior to the merger and where the insurance contract excludes any beneficiary other than the insured.4

In practice, the managers and shareholders of the absorbing company will be able to use three main levers which are each distinct but complementary in order to prevent and limit the consequences of a possible transfer of criminal liability resulting from acts committed by the absorbed company prior to the merger.

I. The first lever

For the absorbing company, this will consist in extending the scope of its pre-merger due diligence by systematically including a review of the criminal risk situation within the absorbed company. This review will make it possible not only to assess the relevance of the planned merger but also, and above all, to determine the target's risk profile and to qualitatively assess the internal risk management procedures in place at the target company.

Although the performance of such due diligences is now essential, they will be rendered difficult by the multiplicity of legislative and regulatory measures already in place which are constantly being renewed and reinforced, and the violation of which is likely to be sanctioned by criminal fines. These include more notably compliance measures in the areas of anti-corruption and anti-money laundering, the environment, competition law and financial market law. In addition to the purely financial but "surmountable" risk that these compliance measures incur for companies, they are the source of indirect risks that may in practice prove much more damaging to the company such as damage to reputation and image.

The second lever will consist in providing in the legal documentation and in particular in the merger agreement, for an indemnification mechanism based on declarations and guarantees specifically relating to the risk of criminal sanctions. However, this solution will only be of interest where the shareholder of the absorbed company is not the absorbing company. Particular attention should be paid to the drafting of these clauses which may sometimes be difficult to implement given the amount of the potential loss or the number of debtors likely to be affected.

To offset this type of problem, an alternative compensation mechanism could be envisaged, providing, for example, for a modification of the exchange ratio initially provided for in the merger agreement or the issuance of “Guarantee" equity warrants which would allow an increase in the share capital of the merged entity by the original shareholders of the acquiring company in the event of its exercise.

III. The third and last lever

The absorbing company and its shareholders may invoke what is called in French “le dol'', that is fraud by deceit. If the liabilities guarantee is ineffective, the absorbing company may as a last resort and under certain conditions, claim fraud in order to seek either the annulment of the merger or the payment of damages on the basis of tortious liability.

Article 1137 of the French Civil Code defines fraud as ‘the fact that a contracting party obtains the consent of the other by manipulations or lies’. It also specifies that 'it also constitutes fraud if one of the contracting parties intentionally conceals information which he knows to be decisive for the other party', but that 'nevertheless, it does not constitute fraud if a party does not reveal to his co-contractor his estimate of the value of the delivery’.

In essence, fraud is constituted by manipulations or lies by one party which lead the other party to conclude a contract which he would not have concluded otherwise or on different terms. This could be the case for example, if the absorbed party deliberately concealed the existence of legal proceedings or an investigation by an administrative authority against it.

Given the difficulty of proving such, it is unlikely that an action on the basis of fraud will actually be considered by an acquirer unless there is a very significant loss at stake.

This decision by the Criminal Chamber of the Court of Cassation, insofar as it exposes the absorbing company and its shareholders to a significant risk of criminal sanctions, is more than ever an invitation to companies and their advisers to strengthen their pre-merger due diligence procedures, particularly in the area of compliance, in order to accurately assess the target's risk profile and the effectiveness of its internal compliance procedures. 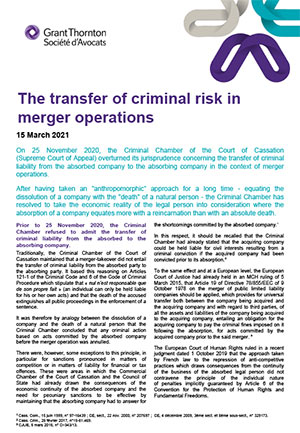 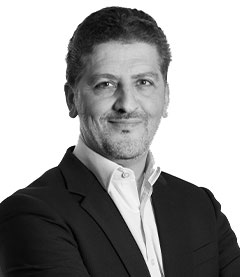