As a reminder, the "APLD“ (activité partielle longue durée) long-term partial activity or furlough scheme was introduced by Act No. 2020-734 of 17 June 2020 on different provisions relating to both the health crisis, other urgent measures, and the withdrawal of the United Kingdom from the European Union. This specific and temporary long-term furlough scheme has been conceived by the French Government to take over from the original scheme put in place to respond to the initial health crisis at the outstart. Initial requests to the furlough measure as a consequence of covid-19 have been renewed on an exceptional basis until 31 December 2020.

The “APLD” addresses those companies facing an ongoing reduction in their activity and long-term or more permanent economic difficulties resulting from covid-19, while aiming to keep employees in employment.

No degressivity in the rate of compensation to employers

Decree No. 2020-926 of 28 July 2020 initially provided for a reduction in the level of the allowance paid to employers by the State with the aim of encouraging companies to rapidly conclude negotiations relating to furlough. The compensation rate was initially to be reduced from 60% to 56% for furlough agreements filed with the Administration from 1 October 2020.

Reduction of the penalty for non-compliance with commitments

Among the mandatory mentions that must appear in the collective agreement or the unilateral document implementing the APLD measure are those relating to the employer's commitments in terms of employment and vocational training. The aim of this measure during its period of implementation is to protect employees against dismissal for economic reasons and to encourage training measures during the period of non-working.

In the event of non-compliance with these commitments (i.e. dismissal for economic reasons of an employee covered by the agreement), the Administration can ask the employer to reimburse the allowance received in the context of the APDL for the same dismissed employee.

Decree n°2020-1188 of 29 September 2020 provides that  the employer can be exempted from the reimbursement of the said sums when he is able to justify that his business prospects have deteriorated further compared to those initially provided for in the collective agreement or the unilateral document.

Decree no. 2020-1188 of 29 September 2020 also repeals the exceptional time limit for the Administration to examine such requests initially set at 2 days during the health crisis and applicable until 31 December 2020.

Consequently, as of 1 October 2020, the Administration has once more, a period of 15 days to notify its decision. A lack of reply within this period shall be taken as an implicit acceptance of the authorization request.

How does the APLD work in relation to the partial activity or furlough scheme under ordinary law?

For a same period of time and for a same employee, the two schemes may be applied consecutively but not cumulatively. However, an employer can benefit from the APLD measure for one part of its employees and simultaneously benefit from the ordinary law scheme for another part of its employees justified by one of the reasons provided for in Article R. 5122-1 of the Labour Code (except for those reasons arising from the current economic situation).

It should be remembered that the partial activity scheme under ordinary law does not provide for a limit on the reduction of total working hours. However, since 1 June 2020, the rate of the allowance paid to the employer under this scheme has been limited to 60%, with the exception of certain sectors which have been more heavily impacted by the crisis and which benefit from an increased rate of 70%. The recent ordinance of 14 October 2020 (n°2020-1255) provides for the principle of a compensation modulation for both companies and employees to be maintained until the end of the year, according to rates that will be fixed by decree to be published by the end of October. These rates of compensation shall apply as from 1 November until 31 December and would be the following:

The Labour / HR department of Grant Thornton Société d'Avocats has advised and assisted several of its clients in their negotiation of a partial activity agreement adapted to their needs. We remain at your disposal and by your side to share our expertise and best practices. 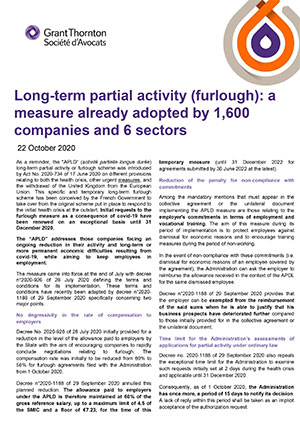