Brexit: what is the social security impact from 1 January 2021?

Brexit consequences on social security prior and from 1 Jan. 2021

An agreement has finally been reached between the UK and the European union regarding Brexit. This provides guidance on the coordination between the respective social security schemes as from January 2021.

On 1 February 2020, the UK entered a transition period which ended on 31 December 2020. As regards EU law, the UK remained a Member State during the transition period. EU rules continued to apply to determine the applicable social security regime.

These EU regulations provided for one unique applicable social security regime for workers within the EU.

Against all odds, the European Union and the UK government reached an agreement on 24 December 2020. This deal provides guidance on the coordination between the UK and EU social security schemes from 1 January 2021.

Assignments started prior to 1 January 2021

Article 30 of the transitional agreement specified that employees who have started a posting or multi-state activity prior to the end of the transition period should remain under the scope of European regulation as long as their situation is unchanged. As a consequence, such workers remained eligible for requesting an A1 form in the EU or in the UK for the full duration of their assignment even if this ends after 31 December 2020.

New rules apply to assignments starting from 1 January 2021. These are very similar to those of EU regulations 883/2004 and 987/2009, the main difference being the possibility for each EU member state to opt in or out of some of the new regulations.

The agreement includes provisions similar to the detached worker rule whereby posted employees are allowed to remain under their social security regime for a period not exceeding 24 months. This possibility has also been opened to self-employed workers.

However, no extension past the 24-month period is provided for – contrary to the case within the EU.

Each Member State has the option to apply these provisions or not. Considering the short deadline, for countries which have not yet opted in or out (such as France), the agreement will be considered applicable for assignments prior to February 2021 pending communication of their final option.

France should announce its decision by the end of January.

If a country opts out, UK assignees will be required to pay social security in the country where their activity is exercised.

Likewise, the agreement contains a new multi-state worker rule similar to the existing one. The place of “substantial activity” remains decisive for the determination of the applicable regime and rules are provided to cover most situations.

In this new context, our firm is here to help with French, as well as international, social security analyses to help ensure the application of the correct social security rules. 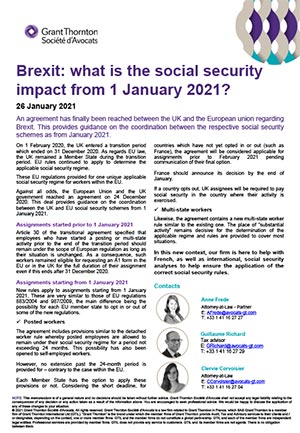