Manufacturers and “importers” into France of refurbished/reconditioned cell phones as well as tablets are now liable for the French private copying levy, although such liability is being contested judicially.

Such private copying exception was created in Germany in 1966 and now exists in various forms in many countries, including France since 1985.

The private copy levy is due in France when storage device products subject to it (notably cell phones and tablets) are put into circulation in France by either their manufacturer or “importer”.

A 1 June 2021 Decision n° 22 rendered by the French Private Copying Levy Commission, effective 1 July 2021, extended the scope of the French private copying levy to now include not only new devices, but also refurbished/reconditioned cell phones and tablets, albeit subject to reduced rates.

Specifically, the levy now also applies to second-hand devices that are put back into circulation after having undergone functionality tests to establish that they meet the safety and use obligations that the consumer can legitimately expect, as well as, if necessary, one or more interventions to restore their functionalities.

In parallel, a law aimed at reducing the environmental impact of information technology in France has been enacted, codifying in French Law the extension of the French private copying levy to refurbished/reconditioned storage devices at specific differentiated rates compared to new devices, but with certain exceptions concerning the refurbisher.

Given the significant impact of the extension of the private copying levy to refurbished/ reconditioned storage devices driving up costs of such devices for consumers and undercutting the competitivity of businesses in the sector, various industry actors, including the union for reconditioning IT and electronic devices and a French consumer’s group, filed cases, currently pending before France’s Supreme Administrative Court to suspend the Private Copying Levy Commission’s Decision n° 22 enlarging the levy’s scope.

Additionally, since 2018 refurbished device operators in France with factories and offices in France have received information requests from Copie France, entity in charge of collecting the French Private Copying Levy.

Since Copie France is now addressing an increased number of information requests, particularly to foreign actors across the refurbished/reconditioned cell phones and tablets sector who sell to French customers via online platforms, it is important to understand this complicated levy and the recent developments to respond appropriately.

Likewise, even in the absence of an information request, it is important to analyze the legal position and determine the appropriate course of action.

Grant Thornton Société d’Avocats will keep you updated on the status of the pending high court decisions and, in the meantime, can help analyzing your situation and with your relations with Copie France. 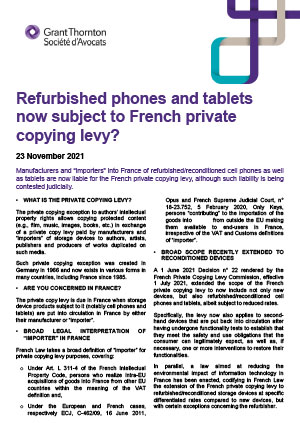