On 28 September 2020, the French Government presented the draft Finance Bill for 2021. It will be discussed by the French Parliament over the following weeks and may be subject to amendments.

The final version will be enacted by the end of December 2020. This tax alert summarizes the main tax measures that would impact the corporations.

French entities are entitled to proceed to a step up of their assets. Such step up is only limited to tangible and financial assets. In principle, the gain recognized is immediately taxed in the fiscal year during which the step up occurred.

A sale and lease back is a transaction whereby a company owner of real property sells it to a credit institution that leases it immediately after under a financial lease agreement.

The draft finance bill for 2021 provides that the capital gain realized upon the sale of the real estate could be taxed over the financial lease agreement period without exceeding 15 years. This measure would not be applicable to real estate companies.

This measure would enter into force for sale of real estate properties preceded by enforceable promise to sell executed between September 28, 2020 and December 31, 2022.

The draft finance bill for 2021 envisages to repeal the favourable measures that were granted to expenses sub-contracted to public or similar bodies so that the rules would be aligned with the ones applicable to accredited private providers. Would be therefore repealed (i) the €2m increase in the €10m threshold and (ii) the double counted expenses incurred on R&D works subcontracted to public bodies. These new rules would enter into force for R&D expenses incurred as from January 1, 2022.

The draft finance bill proposes to repeal the possibility to file R&D tax credit ruling to agencies in charge of supporting innovation. As from January 1, 2021, the ruling request would only be submitted to the Ministry responsible for research.

This optional regime, currently implemented in 20 EU Member States, consists in treating two or more eligible persons presenting financial, economic and organisational links, as a single VAT-taxable person. Transactions realized between VAT group members would be disregarded for VAT purposes, meaning that VAT would not be charged on such supplies of goods and services. The representative member would be responsible for preparing and filing the VAT returns and paying the VAT amount due on behalf of the group. The VAT group would be effective on 1st January 2023. Its implementation will lead to the modification of the scope of Article 261 B of the FTC.

The date of entry into force of the reform of the VAT rules on e-commerce is postponed by 6 months. It would be effective on 1st July 2021.

The case-law principles governing composite transactions (services consisting of several elements governed by different VAT regimes) would be included in a new Article of the FTC (Article 257 ter of the FTC): each operation should be analyzed independently, without being artificially split. A single offer including non-ancillary components with different VAT rates should have the highest VAT rate applied to the whole offer. Exceptions to this principle will be specified and detailed in the Law.

The interest rates used to determine the accounting rental value of industrial premises would be reduced by 50% from 2021 onwards. Their annual revaluation would take place according to a new pro rata.

The creation and extension of establishments could benefit, as of 2021, from a CFE exemption for 3 years. 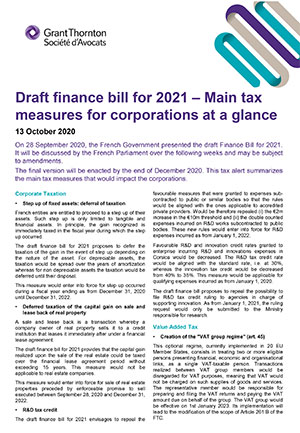