By:
Anne Frede,
Edouard de Raismes
The situation of employees in international mobility is being prolonged.
Contents

One year already and the health crisis is still with us and still disrupting the work organisation of those employees who are usually internationally mobile. This has been more notably seen by the increased recourse to teleworking in a country other than the one in which the activity is typically carried out. Some of these situations which were initially temporary are being prolonged.

The different situations of these employees are numerous.

They include amongst others, cross-border workers who have been teleworking in their country of residence since the health crisis, employees seconded or expatriated abroad who have returned to France, or foreign employees initially on short-term assignments in France who are forced to extend their stay in this country.

Cross-border workers who reside in France but exercise their professional activity in Germany, Belgium, Switzerland or Italy are in principle, taxable exclusively in France even if they work in one of these countries, with the provision that they do not exceed a certain number of days worked outside of the border zone of these neighbouring countries. A reverse principle applies for cross-border workers exercising their activity in Luxembourg.

The sanitary crisis has for certain of these cross-border workers, resulted in them exceeding the established limit by having to telework in France, thereby changing both the place of imposable taxation on their salaries and their employer’s obligations (for instance, regarding withholding taxes).

The signing of agreements by France and its neighbours has however neutralized potential changes in the place of taxation. Indeed, any additional day worked in France due to Covid measures is now considered as a case of “force majeure” and is therefore not taken into account in the calculation of the threshold of days.

These agreements have been renewed until 31 March 2021, and as such the tax situation of these cross-border workers remains unchanged for the time being.

For French employees returning to France from abroad, and employees unable to return to their country of residence, the recognized place of residence for tax purposes is a major issue.

A taxpayer domiciled in France must declare both his French and foreign income (worldwide income) while a non-domiciled taxpayer is taxable only on his French source income. The place of residence also has an impact on the extent of their obligations with regard to property tax, gifts and inheritance tax and information obligations (foreign accounts, trusts).

The place of domicile also affects the employer's obligations regarding the place of payment of the withholding tax on salaries.

An individual is considered a tax resident in France if that person meets one of the following criteria: they have either their tax residence or, if there is no tax residence, their main place of stay in France, they carry out a non-ancillary professional activity in France, their centre of economic interests is in France. In the event of a conflict of residence with another State, the criteria and provisions of the tax treaty must be applied.

The March 2020 communiqué of the Non-Resident Tax Directorate has not been amended. A temporary stay in France due to lockdown measures or restrictions of movement decided by the country of residence does not typically characterise an actual domiciliation in France and may potentially not be taken into account for the assessment of the conventional criteria.

As previously indicated, this communiqué is not a general tolerance measure for employees staying in France since the outbreak of Covid.

An employee’s stay in France that continues to last will have to be increasingly documented in order to justify that it is really a consequence of the impossibility to return to the original State of residence and that this is not also motivated by personal reasons.

The updated observations by the OECD in February show that most countries maintain the same position in only excluding from the conventional criteria those stays on their territory which are solely related to restrictions of movement.

Non-resident and the rule of 183 days

Observations by the OECD now state that where an employee works in a state because of travel restrictions, it would be reasonable for the days spent in that state related to those circumstances not to be counted nor included in the 183 days. The OECD cites several states that have adopted measures to this effect.

The French tax administration has not specifically communicated on the subject. Based on existing comments on the method of counting days (sickness days are taken into account unless they prevent the employee from leaving when he or she would normally have been entitled those days related to the travel restrictions). However, a communication would have the merit of making the calculation of this threshold more certain.

The fact to have teleworked in a State other than the State where the activity is usually carried out since the beginning of the crisis can modify the social security regime applicable for cross-border workers. This can also be the case for employees who were seconded from a State of the European Union or who worked across several States in their profession.

At a Member State level, a consensus was reached to neutralize the effects of a change in workplace during lockdown measures, without any particular formalities in place. This tolerance makes it possible to avoid the need for registration of the employer and the employee in the newly competent country when the situation is in fact temporary. This is still in force for the time being and should be applicable a priori until June 2021.

For those employees who prior to Covid-19 worked outside the European Union and who have returned to France, certain formalities have to be carried out by the employer depending on whether or not an agreement is in place between the country of origin and France in order to secure the applicable tax regime.

The measures taken to mitigate the effects of a change in the State where the activity is exercised by the employee are still in force.

However, particular attention should be paid to the scope of these measures in the event where employees have, or have had, the possibility to return to the State in which they usually exercise their activity. In such cases, the tax and social security reviews of a worker’s situation have to be carried out as the situation regarding the obligations of the employer and the employee may have changed completely as a result. 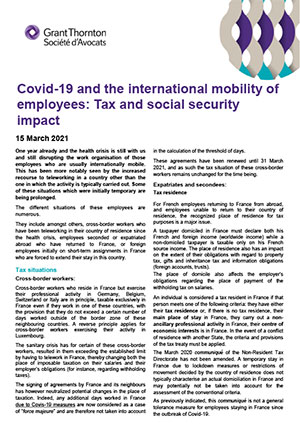 Alertes juridiques
The transfer of criminal risk in merger operations
Lire plus
Brochures
The VAT e-commerce revolution is coming for July 1, 2021
Lire plus
Alertes sociales
Forfait jours : a case law for the employer
Lire plus