The crisis continues to impact the international mobility of employees.

Faced with the prolonged health crisis resulting from covid-19, new restrictions and quarantine measures have been announced. These measures continue to disrupt the fundamental work organization of internationally mobile employees, and an increase in the recourse to teleworking has been implemented. The tax and social security situations of these employees, as well as the employers' obligations may be affected.

The different situations of these employees are numerous.

They include amongst others, cross-border workers who have been teleworking in their country of residence since the health crisis, employees seconded or expatriated abroad who have returned to France, or foreign employees initially on short-term assignments in France who are forced to extend their stay in this country.

Cross-border workers who reside in France but exercise their professional activity in Germany, Belgium, Switzerland or Italy are in principle, taxable exclusively in France even if they work in one of these countries, with the provision that they do not exceed a certain number of days worked outside of the border zone of these neighboring countries. A reverse principle applies for cross-border workers exercising their activity in Luxembourg.

However, the present sanitary crisis may have resulted in these cross-border workers exceeding the established  limit by having to telework in France, thereby changing both the place of imposable taxation on their salaries and their employer’s obligations (for instance, regarding withholding taxes).

The signing of agreements by France has however neutralized potential changes in the place of taxation, and any such additional days worked in France due to covid-19 measures are now considered as a case of force majeure and are therefore not taken into account in the calculation of the threshold of days.

These agreements have been extended until 31 December 2020 (agreement still pending for Italy).

For French employees returning to France from abroad, and employees unable to return to their country of residence, the recognized place of residence for tax purposes is a major issue.

Indeed, a taxpayer domiciled in France must declare both his French and foreign income (worldwide income) while a non-domiciled taxpayer is taxable only on his French source income. The place of domicile also has an impact on the extent of information obligations to be communicated (foreign accounts, trusts). For the employer, the financial issue is that of the tax equalization clause.

Indeed, a taxpayer domiciled in France must declare both his French and foreign income (worldwide income) while a non-domiciled taxpayer is taxable only on his French source income. The place of domicile also has an impact on the extent of information obligations to be communicated (foreign accounts, trusts). For the employer, the financial issue is that of the tax equalization clause.

An individual is considered a tax resident in France if that person meets one of the following criteria: they have either their tax residence or, if there is no tax residence, their main place of stay in France, they carry out a non-ancillary professional activity in France, their centre of economic interests is in France. In the event of a conflict of residence with another State, the criteria and provisions of the tax treaty must be applied.

Information released by the Tax Department for Non-Residents, states that a temporary stay in France due to either a confinement in France or to the restrictions on movement decided by the country of usual residence should not typically be considered as residence in France with regard to the criterion of main place of stay.

Furthermore, it states that with regard to international double tax treaties, it would seem that the fact that a person is temporarily retained in France due to a case of force majeure is not for that reason alone, to be considered as having established their permanent home there, or as having the centre of their main interests there.

This position is in line with the OECD’s comments on the impact of covid-19 for the application of tax treaties.

It should nevertheless be noted that this piece of information is not a general tolerance measure for employees staying in France since the outbreak of covid-19. A certain subjectivity remains on the period of stay to be considered exceptional, and on the notion of force majeure. Equally, it does not provide any details on the other criteria of residence (professional activity, centre of economic interests).

A worker blocked in France and who can demonstrate that they are domiciled for tax purposes in the State where they usually reside and where their family is located should not be considered as a French tax resident.

However, even as a non-resident, an individual’s salary could become taxable in France if the person teleworks and has stayed in the country for more than 183 days. This will create new obligations for the employer.

In other examples of international mobility, the place of tax residence will have to be carefully reviewed. Such examples include: the uncertain status of tax residence abroad of an employee before the confinement, a single employee with no fixed home, French employees returning to France with their family or having strong and numerous ties with France, employees continuing to stay in France when the restrictions have been lifted with the country where they were expatriated to.

Within the European Union, the fact to have teleworked in a State other than the State where the activity is usually carried out since the beginning of the crisis can modify the social security regime applicable for cross-border workers. This can also be the case for employees who were seconded from a State of the European Union or who worked across several States in their profession.

At a member State level, a consensus was reached to neutralize the effects of a change in workplace during lockdown measures, without any particular formalities in place.

Through these tolerances, the employer and the employee do not have make a formal registration in the new country concerned when in fact their change in situation is only temporary. However, particular attention should be paid to employees who continue to telework in a country other than that of their usual place of activity.

For those employees who prior to covid-19 worked outside the European Union and who have returned to France, certain formalities have to be done depending on whether or not a social security agreement is in place.

Any introduction of telework by the employer, initiated as a new organization to working, and which is put in place outside the measures taken for covid-19, may as from now, call into question the tax and social security regimes that were previously applicable.

The issuing of specific fiscal and social security measures relating to the present health crisis and the particular situations described above, should therefore incite companies to carefully review the place of residence of their employees as well as the place of taxation on their salaries, and more particularly where there is a planned long-term reorganization of any working conditions. 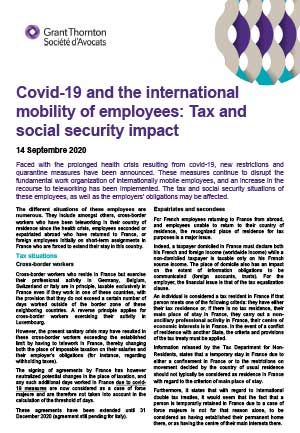