For several weeks, the whole of France's economic life will be affected by the exceptional situation we are facing due to the coronavirus epidemic.

All aspects of economic and business life are affected, particularly taxation. In addition to the support measures announced in social and tax matters, the business continuity plan of the French General Directorate of Public Finance (DGFIP) provides us with information on the consequences of the crisis on the daily activities of tax officers, particularly in terms of tax audits. The General Director of Taxes has confirmed that tax audits are not, for the time being, a priority mission for these agents.

As a reminder, 54,000 tax audit operations took place in France in 2019 (+8 % compared to 2018), generating 9 billion (16.3%) after several years of decline. According to our information and as a result of this continuity plan, until further notice, the DGFIP has decided the following:

However, the DGFIP recommends that its auditors complete as quickly as possible those controls that are almost complete and that do not pose any major problems (compliant or low yield cases, regularization pursuant to Article L 62 of the LPF with payment deadlines, etc.

As the business continuity plan is updated in line with current developments relating to COVID-19 these measures are subject to change. We will not fail to keep you informed of any changes. 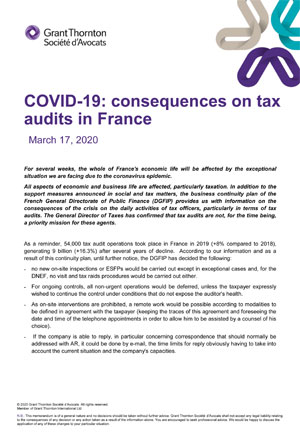